The annual overnighter (Dec 12 & 13) to Rawson was swapped to the new destination of the 1st Tee Motel at Mirboo North. Here's Stan's excellent report and a selection of photos from me (Jules), Graham Aitken and Peter Barclay.

Stan (that’s me) and Marlene left Colac at around 6:30 am to meet everyone at the Geelong Nth rendezvous.  Others who gathered were Graeme A, Marty, Peter, Phil , Gentle, Jeff, Jules, Mark, Marlene,  Peter and Graham  (apologies for lack of surnames and maybe incorrect spellings of Christian names)

Graeme A as lead rider, with Phil doing tail-end Charlie.

All fuelled up, we headed along a scenic route to Bacchus Marsh.  See map of outgoing and homeward bound attached.

Coffee and pissed-stop at Bacchus Marsh, then onward around the top of the airport via Mickleham Road and Donnybrook Road to Whittlesea.

The ride along the ridge through Kinglake to Healesville is always very picturesque.

The mandatory lunch break was taken at Healesville, where the crew caught up with Peter R (Colac) and John (Apollo Bay).   Also an opportunity to shed some clothing as the temperature was now heading into the 30°c+.  The expected evening cool change seemed like a myth.

Refuelled for the leg to Mirboo Nth, we then headed along the timber cutting areas Yarra Junction, Powelltown and Noojee into the dairy area of Hill End. (Hill End once had a school in the 1950’s and 60s as my older brother and sisters went to it.   It actually burnt down and we still have melted coins that were found in the ashes.  I was still just preschool)

Again this is a top ride and is actually marked in the Australia Motorcycle Atlas by Peter Thoeming (The  Bear)  Hema Maps https://www.traveluniverse.com.au/Australia-Motorcycle-Atlas-200-Rides-6th-Edition-Hema/9781925195132.htm

Through the farming area of Gippsland, waiting an eternity for the lights to change at Trafalgar then onto Mirboo Nth and the Tee One Motel.  (A distance of 450kms for the Colac entity) A great ride.  I said to Gentle that my talk earlier in the year about South Africa paled when riding through our beautiful country.   A lot more economical, travelling at home too.

Lloyd from the hotel did a shuttle run so we all could get into the hotel for a beer and a meal.  The benches to sit at in the main bar must have taken some getting in to the hotel.  I guess they are local timber, but not merbau (Mirboo) as I misled myself.

Back to the Motel for some light banter, and poetry from Phil.  Also Gentle’s bike wasn’t going anywhere.   See the Ulysses Social (Facebook).

The next morning was extremely overcast, but that was not going to deter Mark, Marty and Jules from a trek over Mount Hotham.   The rest of us would make our way back home by the shortest route possible Jeff and Graeme left first then the remaining ones were guide by Gentle and Phil through to Craigieburn and onto the freeway /motorway.  By the time we got to Tooradin the sky was starting to fall apart.   A coffee break at Craigieburn and then onto the M1.   For the 1st time the new screen extension I had put on my bike proved to be a nuisance, cutting my visibility.  So for most of this I stood up until the Lara roadside stop, where it came off very quickly.   My expensive Forma boots also leaked like a sieve.  Very disappointing!  Traffic along the M1 was at times quite thick, but once on the Geelong side, it tapered off.

Photos of the Hotham trio, showed that they too had a challenging, but safe ride, with visibility and moisture at a peak.

After the return journey, a hot shower and a hot cup of tea hits the spot.

So once again, everyone had a great time and kept the rubber to the road.

A big thank you to Gentle, Graeme, and Phil for the job they did

Stan's map of the route

Peter R & and John A traveled via the Western Ring Rd and were awaiting us at Healesville.

Below: Marlene's water spray cooling system worked a treat for her!

A little prank! Will it cure Gentle of using rope to secure his luggage?

Jules takes up the story of the trip to Bright. The weather forecast for Thursday was extreme - as in an 'extreme' amount of rain and storms! John A and Peter R headed of early for Bright, then the rest geared up to head back via Melb. Stan has reported on their trials!

Mark N, Marty and I waited until my mate Bill showed up in his turbo MX5 Mazda to join us for a run over Hotham to Bright. Mark led us expertly to Bairnsdale via Heyfield - we kept off the Princes Hwy in the wet conditions. After lunch at Bruthen I led the three of us on motorcycles up the Great Alpine Road. Although the road was wet, there was tons of grip and we had a pretty good run to Dinner Plain. From there to Mt Hotham it became foggy with only a couple of metres visability one the torrential rain hit. It was a VERY tough and challenging ride down to Harrietville. It rained all night in Bright and we later learnt that the Hume was cut and people had to be rescued from flooded cars. Bright apparently had 150 mm of rain in less than 24 hrs.

Top of Mt Hotham just before the torrential rain hit us.

The ride to Mirboo Nth, the accommodation and the company were great. But I think everyone had a very memorable experience on the homeward trips. If you didn't go, you missed out BIG time.  Thanks everyone for making it a good couple of days.

Thanks Jules and thanks Stan for the great reports.
Thanks also to Gentle and Graham A for organising and leading the ride.
This trip was a good one and had some very challenging weather for us all!

For three of us the challenges continued as we went over Mt Hotham.
As Jules said - all good up to the summit and then the "fun" started...

After Bright I headed off to go over the ranges via Whitfield and Mansfield, because the VicRoads Traffic app was still saying that the Hume Fwy was closed between Wangaratta and Benalla.
So having made that choice, and leaving at 6:30 am while not raining... the rain well and truly returned all the way from Myrtleford to Mansfield. And some fog for good measure over the high country past Whitfield.
I checked the radar at Mansfield and extended my stop to wait for the storms to pass.

As you saw, Jules and Marty went the Hume route leaving later and it proved to be open.

Bugger!
So much for accurate VicRoads info!

All fine from Mansfield as the rain and thunderstorms held off.
Jules and Marty passed me eating a mushroom pie at Riddells Creek Bakery.
Then I caught up with them at Anakie.

Despite the weather challenges it was a good few days away. Somewhat fatigued but happy after another trip. 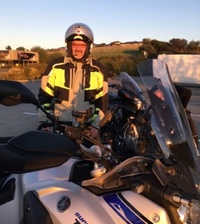